Well, the time has come to wrap up our review of the last leg of our trip. It has been a brief but good introduction to the Dominican Republic, an up and coming expat destination. We've dropped in on the Puerto Plata and Samana (Las Terrenas) areas of the north coast (Atlantic Ocean) and have returned to the south coast (Caribbean Sea) to end this introductory visit. It's been an interesting three weeks.

Let me begin with Santo Domingo, the capital of the country and home to some three million people. I'll wrap this up with a snap shot of Boca Chica, a community less than 30 minutes east of the capital.

We arrived to the capital at the beginning of our visit. There are other international-level airports in the country, but this is the most utilized and offered the best prices at the time for us. When we first arrived, we stayed two nights in what is called Zona Colonial. As it sounds, it is the historic district of the city and one of the "things to see" in the capital. It was worth seeing and is in some ways a similar setting as we found in Panama City, though not near as interesting as Panama's old city.

Like virtually everywhere else we visited in this country, investments were made in the past and have lagged ever since. On the one hand, Santo Domingo is a port city, a river port city. On the other, it is 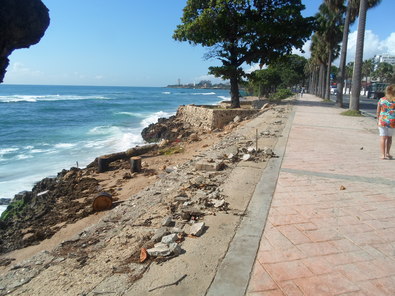 the center of government and a key tourist entry point. Money is definitely coming into the country, and the capital is getting a chunk of it - just not in the  areas we expected. More about that later.

Upon returning to the city this past week, we stayed close to but outside the Zona Colonial district. We thought we wanted to be near the malecon, typically a bustling and exciting place to spend a few days. A malecon is simply a waterfront walk; in this case, the Caribbean is the water. Call it the board walk. Hard to think of a prettier image (in our minds anyway). It is often the magnet for locals and tourists as it will contain shops, great views and just a great place to hang out. Wow! Were we disappointed.

The malecon is long and was clearly a major commitment of the government.... 50+ years ago. To say we were disappointed would be an understatement. Much of the asset has fallen into serious disrepa 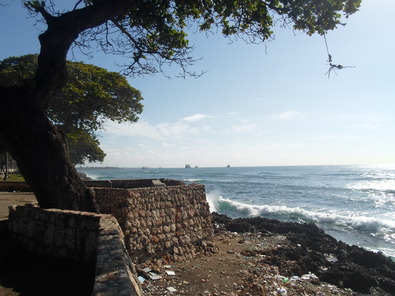 ir and clearly reveals that little investment has been made to maintain this asset for some time. Except for a couple of small spaces which had at least a modicum of attention, this malecon is unkept, broken down and a bit scary.

The strip itself, referring to the road and businesses serving the area along the malecon, have largely left. In fact, the only real businesses there are a couple of large hotels with casinos (ie. Sheraton) and some condos overlooking the sea. If they disappeared, there would be nothing there but abandoned and dilapidated structures (which are in abundance already). Prime waterfront real estate and it is shocking to see what has happened to it.

The other issue is the evolution of the road along the waterfront - a relatively unregulated four-lane two-direction speedway. There are numerous crosswalks, but only a couple of stop lights. The lights are for intersecting traffic, not really for pedestrians. Cars, motor bikes, buses, and trucks roll through here at 45-50 mph or more. Pedestrians cross but in a take-your-life-in-your-hands manner. The heavy odor of auto and bike fumes is strong at times. The sea is polluted (and roped off ) and small beaches are littered with trash and broken glass. I'm bummed just writing about it.

The net result is that the malecon was a disappointment. Did I say that already? We did check out the center of the city in which a lot of the investment action is taking place. The areas called the Piantini and Naco neighborhoods are vibrant and are clearly where the money is being invested. We probably saw no fewer than six - ten condo/apartment towers being built. Malls and other higher-end shopping is evident, as well. We attempted to get a realtor to show us a couple of units in the under $150k range, but he clearly wasn't very motivated to do so.

There is clearly opportunity in the city and makes it interesting to me. I'm not much of a city person, so the trade off would be huge. Plus, it is not an inexpensive place to live - at least in the areas you would want to live. Not only that, just the cost of food, utilities, housing, etc., make it a costly option. So, if one is trading off the convenience of a U.S. lifestyle for a inconvenient one, then there had better be a very good reason for going through the many costs of the transition. I'm not convinced it was there for us.

Now Boca Chica, on the other hand, was a somewhat pleasant surprise. I can say at the outset that it is not a place for us to live. We had such mixed reviews as to what kind of situation we'd gotten ourselves into here. First, it is a locals beach hang out, or so we were told. So, noisy and crowded, and full of vendors bothering you every two seconds trying to sell you something. It's close to the capital and has very interesting beach and water characteristics, which makes it a local favorite for families and such. 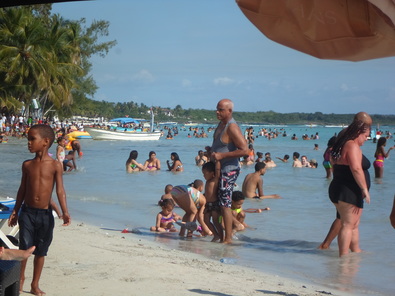 Second, Boca Chica is to the south coast what Sosua is to the north - a prostitution haven. It's pretty black and white, folks. Old white guys with young black Dominican women. Again, it's apparently legal and it is clearly an important part of this economy. So, you have this strange mix of Dominicans and expats enjoying themselves on the white beaches and beautiful blue-green water mixed with the sociological and economic aspects of the sex trade. It was disturbing to watch, at times, frankly.

The end result, we were pretty apprehensive about our decision to spend three days here. We chose it because it was in closer proximity to the airport, making our exit easier.

So, what happened? Well, we enjoyed the white, chalky beach and the calm, blue water. It is especially calm because the area is protected from the waves rolling in from the Caribbean and the water itself was little more than waist deep for about a half-mile from the shore. The area was protected by what looks like a man-made reef, which keeps the water calm and quiet. 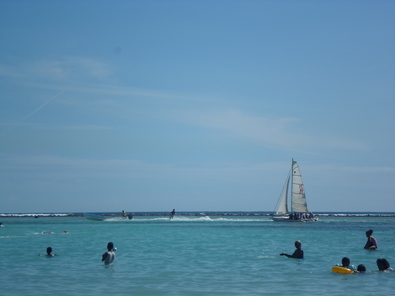 Further, the maintenance by restaurants and hotels made the place better kept than we'd seen nearly anywhere else in the country - oddly enough. I say "oddly" because this is not what we expected from the kind of backwater impression we had of the place. Don't get me wrong, there is plenty of backwater here. The better days were some decades ago, based on the condition of so many things. But there was some care evident here in key areas, especially on the beach.

Finally, it was vibrant with a fair amount of fun in the air. One example, in the evenings parts of the downtown were sealed off to cars, allowing restaurants to take over the streets with tables and chairs, and people gathered to eat and socialize. It was a community (involving all the aforementioned constituents) - so, a rather odd community. We don't know if this happens every night or just weekends and holidays, but it was a nice experience.

Bottomline, we enjoyed our stay in Boca Chica.

I could go on, of  course, but our stay in Boca Chica ranked up there as a favorite for relaxation and fun. Certainly better than Santo Domingo as far as I was concerned. It was hard to find much about Santo Domingo to recommend, except that it is a city and cities have more amenities. Don't see it working for us, however. We need to reflect on our visit to the country and see how it stacks up with some of our objectives for a second residence and home. Perhaps I'll share those thoughts in a later post.

Back to work soon, and winter.