We spent close to $200 for a taxi from Sosua to Las Terrenas, a nearly 3-hour trip along the northern coast. Las Terrenas is on the Samana Peninsula. First impressions were not very positive. This may have been due to all the positive press we’ve read over the past 2-3 years on the up and coming status of the area for expats seeking a great lifestyle.

Well, over the past couple of days we’ve walked up and down these streets looking for the pot of gold that warrants such praise and adoration by the travel press. We haven’t found it yet. In fact, we’re downright dismayed at how this relatively expensive yet underdeveloped area of the country is so attractive to these people.

In fairness to some of these living overseas outlets, they’re most interested in the “next big thing” in terms of development over the next 10-20 years. And their angle is finding locations that have great development prospects at currently lower prices. Where’s the next Cancun or Cabo?

One other thing before we wander through this. The country has a longer history with European travelers than Canadian or Americans. You see that influence especially on the north coast. Apparently the largest group is French, followed by Italians, Germans and Brits. So, this has been a noticeable change from our visits to Ecuador, Puerto Rico (of course) and Panama.

First, there are miles of sandy beaches. That’s a plus. The better ones are a ways away from Las Terrenas proper. And with some money you can get beachside land purchased at prices much better than Cancun and such developed places, and build your dream house. 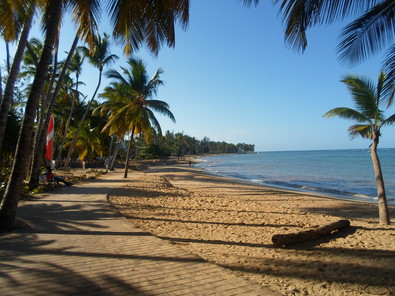 We spoke with a couple from Boston who were doing just that, only they were doing it in some remote village further east of Las Terrenas. They admitted that there were few amenities. But it was a vacation home, not a residence. They looked to be in their late 50s.

That’s not really an option for us - on several levels. We don’t have the cash to make such substantive investments for a vacation home. And, we need amenities to be easily accessible, preferably by walking. We did find some properties online that fit within our budget, but didn’t look at any while we were here.

Second, there are plenty of restaurants and knick-knackie shops around to create a sense of a town with numerous small scale amenities. Third, there appear to be steady winds that keep it a pleasant place to hang out, probably even in the hot, muggy summers. It does feel more humid here than it did in Sosua, even with the wind. Not sure what that’s about, however. We just notice this clammy feel about everything.

Fourth, there is a relatively new highway that services the area from Santo Domingo, as well as a international level airport about 20-30 minutes to the west. Thus, accessing the area has gotten decidedly easier. And that matters if development is going to happen in the future.

This is a typical, poorly planned and supported community, infrastructure-wise. This is especially clear recognizing that a good portion of the ocean-front restaurant properties had been burned down about five years ago and rebuilt. The government spent a good chunk of money in street and sidewalk renewal, but really didn’t address the fundamental traffic flow issues prevalent in growing towns.

IT IS A ZOO during high season and day time hours. Noise, polluting motorbikes, four-wheelers, and 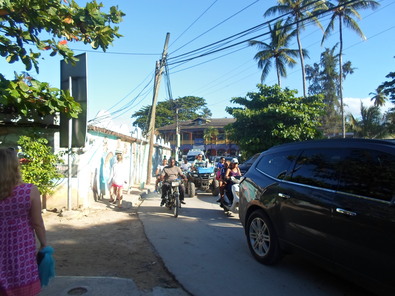 cars jam the narrow streets. People just pull over and park (not much choice as there are few parking spaces) making traffic movement even more troublesome as you wind through narrow streets. In sum, this place is so much like a developing-world village that has not been prepared for growth.

Second, it is not inexpensive. For example, we bought two 3-scoop cups of ice cream for about ten dollars. Cheap national beer typically sells for $3.25, before tax. The killer is the 28% tax on everything! Yes, 28%!! Then, add a tip for most meals or services and you can see how you’re easily adding 40% onto anything you buy, which is already not exactly cheap to begin with. As far as I know, this tax rate is the same all over the island.

This, of course, is not surprising in a foreign, touristy-type place. But for a place to regularly live, that chews on your leg a bit. We found the same challenge in visiting grocery stores - high prices. That’s especially true for foreign products. And much of the processed foods, fruits, drinks, meats,… hmmm, nearly everything, are imported. 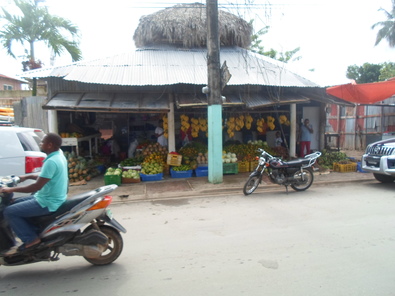 Ok, that's not entirely true. We find that oranges, papaya, mangoes, limes, coconuts, bananas, rice, meats, fish, potatoes, carrots, squash, and a number of other items, are grown here. We saw some large rice fields readied for planting, so that was good to see. But if you want apples and berry-type fruits, this is not the climate, apparently, for these.

Third, even with better access, Las Terrenas is still a couple of hours from a major city; that being Santo Domingo.

Fourth, the water is not as gorgeous as the Sosua area. It has some very nice spaces, but just notch lower on that count. To go with that, no marina or even well-mapped out waterway approaches for boats (to miss the hidden reefs) has emerged.

All told, our visit here did not change my mind about the suitability of living here for us. In fact, as stated at the outset of this article, it was considerably less than expected.

In sum, a nice place to visit, enjoy some beaches and sun, restaurants, etc., but not a place I want to live.

Heading off to Santo Domingo in the next hour. Will try to check out some real estate while there. Will update you when I get a chance.