Not My Kind of Place

Before the visit to Playa del Carmen, Mexico fades into a distant memory (and that takes less time as I get older), I wanted to post some of my thoughts on our 16-day visit 19 December - 4 January. We stayed the whole time in Playa del Carmen.

It was not our intent to do so, but the lack of confidence in our supposed 5-day Cancun reservation made change the best option. I'll get into this more a bit later.

The main reason for visiting the region was to check out the area as a potential second residence. I'm not all that good of a tourist on a good day, so my mind quickly gravitates toward answering the question, "Would I want to live here?"

First, let's talk about the area. We're looking at the Yucatan Peninsula here, which is a region of Mexico influenced more by Mayan culture than Spanish, so I'm told. So, Mayan descendants, customs, cuisine, and influence are more prominent in the region. It is also a region famous for its cenotes, or underwater caves. 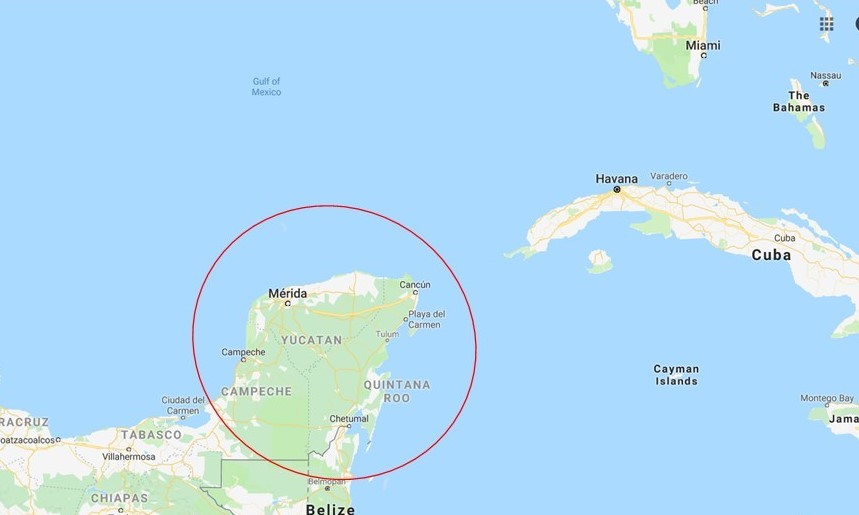 Let's take a quick but closer look at each of these key areas here. Looking at the map below, you can see the tourist hot spots are located within a relatively short distance from each other. We're talking Cancun, Playa del Carmen, Cozumel and Tulum, even Isla Mujeres to the north.

Playa del Carmen is about 45 minutes south of its more popular neighbor Cancun, and a slightly longer distance to Tulum to the south. Playa is across from the island of Cozumel. There are numerous smaller growing communities in between, as well. 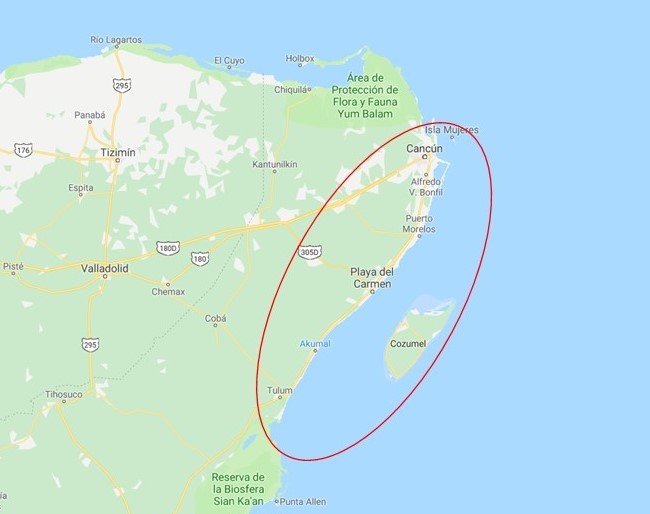 Tulum to the south is the relatively new "thing" for the eco-friendly types, which includes the Hollywood crowd - a sort of new, trendy Cabo.

If you want to spend a few nights drinking fresh mango juice in a tree hut in the jungle for only $1500 or more a night, then this is your place. Of course, there are less-expensive options, but the same flavor.

Playa del Carmen is also relatively recent to the tourist development scene and more 'blue collar', if you will. It is estimated to have around 150,000 people living there on a more permanent basis, though the high-season population is much higher. Famous for it's Fifth Avenue shops, restaurants and bars, it is a relatively sleepy beach town, and a fishing village prior to this recent growth.

Cozumel is known for its beaches, but even more for its snorkeling and scuba diving options. 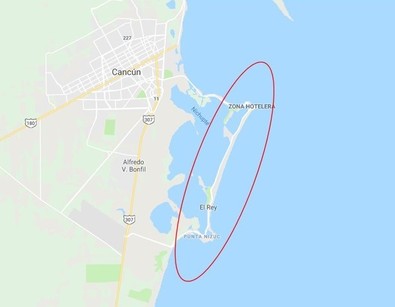 Finally, there's Cancun. It is the headline act for the region with a population of well over 500,000 more or less permanent residents. There really are two Cancuns, the one the locals live in and the one the tourists hang out. While I suppose that would be the typical scenario in tourist towns, it is quite geographically evident here. Check out the map to the left.

Dozens of resorts and hotels are located on this narrow strip of dirt. This is the hub of the tourist population. The locals largely live in the city you see inland.

That's a quick summary of the map here. Let me comment on my impressions of the place, particularly as a second residence option for us.

Before I get to these impressions, however, I have to comment on our experience in finding and reserving property for this trip. We started to nail down our desired locations in September, which is earlier than we'd ever done since we've been traveling. It appeared that options were disappearing quite quickly, so we jumped in in earnest.

However, we found that the accuracy of the information being offered was very poor, particularly outside of the hotels and resorts. That is, when looking to rent private apartments and condos, the managers of these properties were generally quite amateurish.

Numerous times we'd find an interesting prospect and inquire to make sure it was available, with the amenities stated and price only to get told, no it is not available, or the priced doubled or some such. Yes, we understand holiday prices are different than off-season, but the sites should reflect this. This is not the first holiday season they've seen. We reserved for December 19th, we thought prices would reflect these dates. No, apparently not.

And about our Cancun reservation. We had confirmed reservations via Booking.com for five days in Cancun, but our attempts to locate exactly where the apartment was and the who to contact for this property never became clear, at least not before the free cancellation period ended. Emails were not answered while in the States, and the people we spoke with while in Playa didn't have a reservation for us. We had locals call and talk with them, but no details could be confirmed.

Since we had a deadline to cancel, something like the 23 or some such, we pulled the trigger and cancelled. We then scrambled to get the housing gap filled, and with the wonderful efforts by the folks we were already staying with, we resolved the issue.

Well, let's not dwell too long on this stuff....

The food was ok, nothing exceptional in price or quality, but fine; and the fish was generally good, if you were careful to stay away from the mouth;)

Let me run through some things that come to mind about the area.

1) Weather was unstable. Yes, the weather was warm during the day and in most evenings. And, yes, it is hard to judge a climate by a couple of weeks visit in a single year. Locals even commented that it was a bit off this year. While 70s and 80s are nice, humidity was noticeable most days, a no-no for us, especially for this time of year. Rainy days were not infrequent. We expected evenings to be coolish, but most were not. That is, we read that temps will get chilly in the evenings so we dressed accordingly. But only a night or two was this an issue.

Winds were generally the saving grace in our battle with humidity. While buildings and trees block the wind oftentimes, it generally was a welcome presence to take the edge off of warm, humid days.

2) Ocean was not calm. We've seen some pretty calm seas which makes swimming a pleasant experience. We found the seas here to be quite rough, generally speaking. The wind was a positive for keeping the temps and humidity in check, but that meant that seas were a bit rougher than what we generally noticed in Dominican Republic, Puerto Rico, or even Puerto Vallarta. Maybe we are just getting too fussy in our older age.

3) Sea views are limited. The land is largely flat and the building code seemed to prevent condo towers above a 4 or 5 floors. This makes for an easier town to walk in, but not much to see while at home or away. This was really a downer for us when viewing this place as a place to live. It was like, well, living in a city - streets, cars, noise, your neighbor in your face, but nothing to see. Stay in Fort Smith, in that case.

4) Little history. As a recently developing city, it is a young town (though founded in the 1930s, I think). So, it has few things to see as a city with a heritage, at least beyond the fishing village it was for most of its existence. So, the fishing village is wiped away and the touristy stuff replaces it - recently.

5) It has a seaweed problem. This is no little issue, one that city leaders are discussing as to how they can address this problem. Recent years have brought more frequent bouts with the brown invasion with its fouled waters and beaches, and the resultant smelly decay.

It is hard to sell people on spending $1000 a night in an all-inclusive resort on the beach, and deliver a crappy beach experience - aesthetically and under foot. Kinda ruins the good vibes.

As we walked through the city day after day, we just couldn't see ourselves living there. A visit, ok; a life, not so much.

In the end, if a new place, especially a foreign new place, doesn't deliver significantly better experiences that one values, or better costs for run-of-the-mill experiences, then one has to wonder why he or she would do it.